Entries will need to demonstrate exceptional filmmaking; work in which technical skill and prowess in production / post production elevates an idea or dramatically enhances its execution.

Criteria considered during judging will predominantly be the execution.

There is no overall limit to how many times the same piece of work can be entered into Film Craft.

Each execution constitutes one entry and all executions must have run within the eligibility period.

A01 Direction.
The vision and achievement of the direction including the translation of the creative brief through a director’s vision and how well that vision has been achieved. This may include but is not limited to, the way that casting, set design, sound design and cinematography have been used to bring that vision to life.

A02 Script.
The film’s script, as written. Analysis of the script will include dialogue, voice-overs, scene-setting, movement, actions and expressions, including how successfully the script delivers on the creative idea and supports the final execution.
* You are required to provide a written English translation of the script as part of your submission.

A03 Casting.
The vision and achievement of the casting. Including the pre-production selection of actors, dancers, singers, models, non-professionals, animals and other talent.
* It is highly recommended to provide a two minute demo film showcasing the casting process in addition to the film as it aired.

A04 Production Design / Art Direction.
The aesthetic of the production design / art direction. This includes set design and location builds, as well as the overall look, feel and atmosphere of the piece and how the narrative has been enhanced by the artful management of the visual components.

A05 Cinematography.
The quality and effect of the cinematography. The style, artistic choices, camerawork, cinematic techniques, shot composition, lighting and other effects will be considered.

A06 Use of Original Music.
The impact and success of original music compositions, created specifically for film advertisements. The artistic achievement of the track itself will be considered, along with its contribution to the piece as a whole.

A07 Use of Licensed / Adapted Music.
The selection of licensed or adapted music. The way a track supports the script, creates the necessary atmosphere or otherwise delivers on the creative brief will be considered.

A08 Achievement in Production.
The overall success of a film, assessed within the context of its individual ambitions and challenges. Scale of production, budget constraints, technical issues, challenges faced during the production process and how the production team made best use of resources available to them to achieve the final execution will be considered.
* It is highly recommended to provide a two minute demo film showcasing the production process e.g. a ‘making-of’ or ‘behind the scenes’ film, in addition to the film as it aired.

B01 Editing.
The technical and creative success of the edit. All aspects of the film’s edit will be considered including timing, pace, visual dynamics, dialogue dynamics, sound integration and overall storytelling.

B02 Colour Correction / Grading.
The overall achievement in colour correction and grading to create consistent and stylised colour schemes that evoke a specific emotion and transform the final look of the film. Including, but not limited to, how the grading works cohesively with the lighting, production design and direction to affect and enhance the mood, feel and interpretation of the final footage.
* It is highly recommended to provide a two minute demo film showcasing the before and after effects of correction / grading.

B03 Sound Design.
The creative use of sound design within film advertising. Technical excellence in recording, mixing and the synthesis of samples and sound effects will be considered, along with the cohesion of the edit and its impact on the overall piece.

B04 Animation.
The use and aesthetic of animation in film. All types of animation, including cell, stop-motion, graphic, silhouette and computer animation in 2D or 3D will be accepted. For films that include both animation and live action, it will be the animation that is judged.

B05 Visual Effects.
The creation of film environments and other visual effects, including the aesthetic and technical excellence of the effects themselves along with the success of their integration into real footage.
* It is highly recommended to provide a two minute demo film showcasing how the visual effects were created. 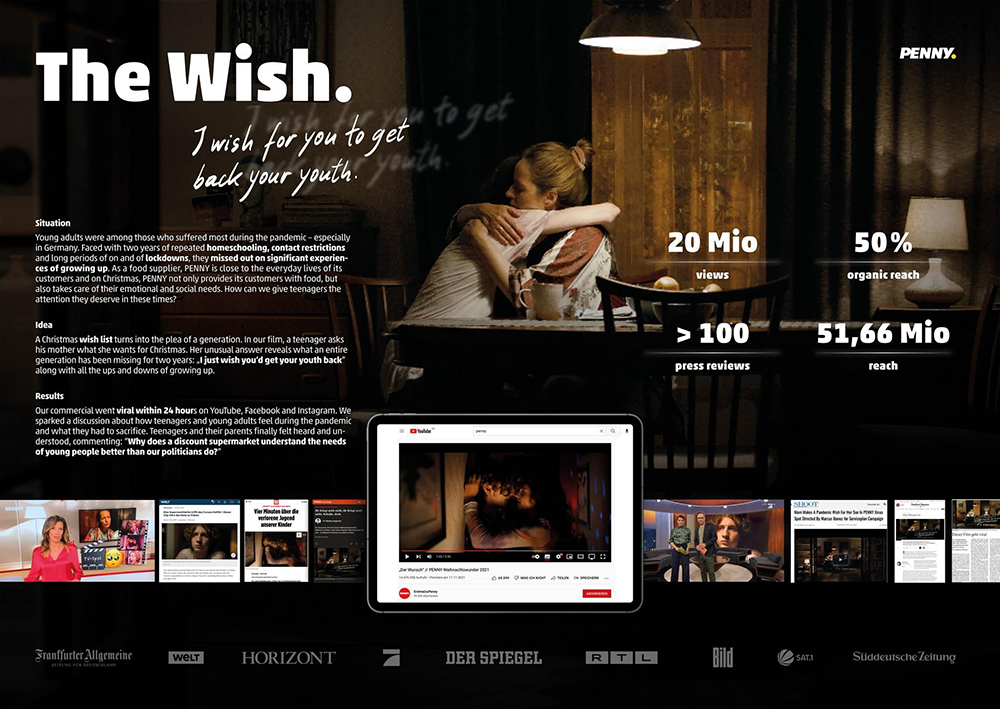 A wish list becomes the plea of a generation, when a teenage boy asks his mother what she wants for Christmas, and she answers in the most unusual way: “I wish for you to get your youth back” – along with all the ups and downs of growing up. She wishes for everything her son so deeply missed, during two years of the pandemic and hard restrictions in Germany. In the film an intimate chamber play turns into a roller coaster ride of emotions at the very scene of the pandemic: a family’s home. The audience relives what could have been, from parties, to falling in love and traveling. The mother's monologue, the seamless tracking shot and the reinterpretation of Bon Jovi's "It's my life" take us from youthful highs to the deep pain of first heartbreak. In four minutes, the film tells an entire coming of age drama.

Other Lions in Craft